You are here: Home / Archives for Pamela Reynolds Watch the 2015 BioE Master of Engineering students explain their capstone projects in these 1-minute videos. We’re proud of you! Watch the 2015 Commencement ceremonies online. Researchers in professor John Dueber’s lab have taken us one step closer to producing more medications through synthetic biology by replicating some of the chemical processes of the opium poppy in yeast. Will DeLoache, bioengineering graduate student and study lead author, and collaborators, were able to synthesize the poppy compound reticuline from tyrosine, a derivative of glucose. Bioengineering professors Irina Conboy and David Schaffer, have discovered a small-molecule drug that simultaneously revives old stem cells in the brains and muscles of mice. This is excellent news for anti-aging research, giving hope that there could exist a single intervention that rescues the function of multiple tissues throughout the body.

Synthetic biology applications from the astronomical to the anatomical were explored in the Spring 2015 Berkeley Engineer magazine. The CellScope team in Professor Dan Fletcher’s lab have made another breakthrough in mobile microscopy, using video to automatically detect and quantify infection by parasitic worms in a drop of blood. The new device can help revive efforts to treat common, neglected filarial diseases in Africa, such as river blindness. 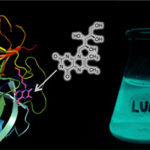 Professor Gerard Marriott’s lab has found amazing applications for a new type of genetically encoded fluorescent protein that is found in a symbiont populating the light organ of the ponyfish. The uniquely low mass and long fluorescence lifetime of the protein make it potentially useful as a biosensor to carry out rapid, quantitative and proteome-wide analyses of specific protein interactions, or to screen for drugs designed to disrupt a specific protein complex in a living cell.