Berkeley Bioengineering Assistant Professor Irina Conboy and collaborators have identified a critical biochemical pathways linked to the aging of human muscle. By manipulating these pathways, the researchers were able to restore the muscle’s ability to repair and rebuild itself, offering hope for future injury repair and anti-aging techniques. 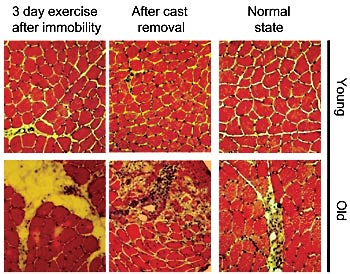 Conboy and collaborators at Institute of Sports Medicine and Centre of Healthy Aging at the University of Copenhagen in Denmark compared samples of muscle tissue from nearly 30 old and young healthy men who participated in an exercise physiology study.

Previous research in animal models led by Conboy revealed that the ability of adult stem cells to repair and replacing damaged tissue is governed by the molecular signals they get from surrounding muscle tissue, and that those signals change with age in ways that preclude productive tissue repair. This more recent study revealed that the same pathways are at work in human muscle.

The findings are reported in the Sept. 30 issue of the journal EMBO Molecular Medicine, a peer-reviewed, scientific publication of the European Molecular Biology Organization. Collaborators included Dr. Michael Kjaer from the University of Copenhagen, Dr. Morgan Carlson and Dr. Michael Conboy, researchers at UC Berkeley, and Dr. Charlotte Suetta, a post-doctoral researcher in Kjaer’s lab.

Read the full story at the UC Berkeley News Center. This research has also been featured at LiveScience and IO9, among other news outlets.